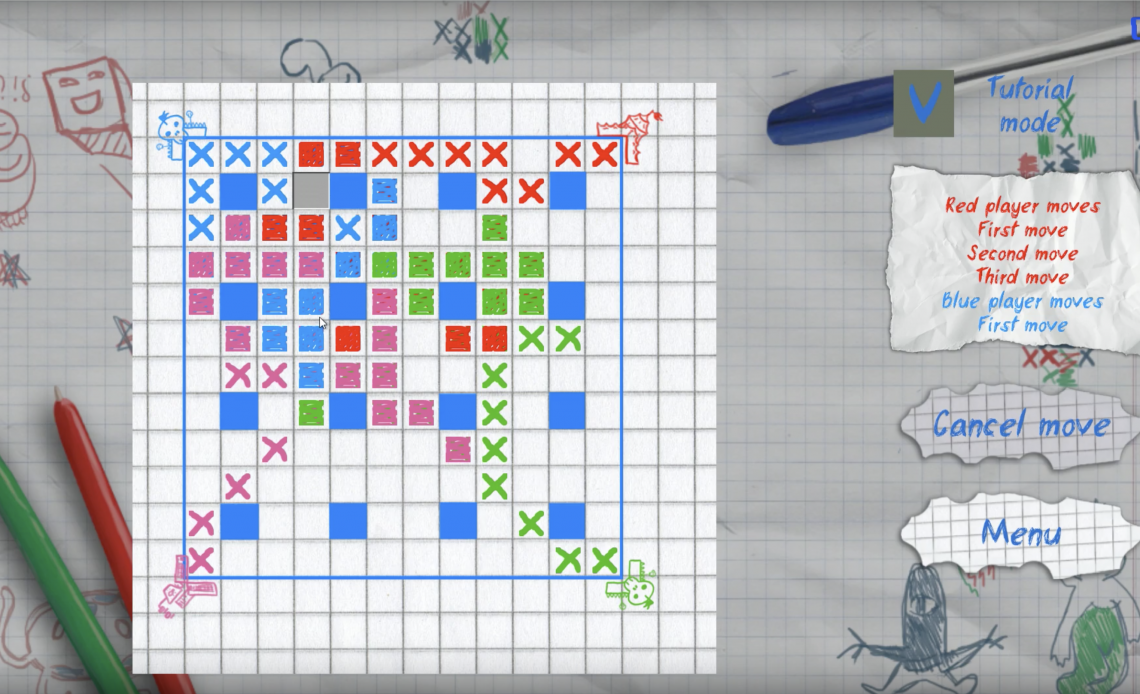 It’s our first article about the ongoing process of game developing. And about the game Virus. Hooray!
Today we want to tell you how we are working with the finished prototype in order to improve it.

Once upon a time, we got the suggestion from one developer… He had the finished prototype and he was really interested to improve it and change its appearance. For sure we agreed to breath new life into the game. It was our duty.

What is his game about? The idea of the game is to place your crosses on the free cells of the battleground, and if the opponent’s crosses are nearby, absorb them with your own. If the opponent runs out of the opportunities, he will lose.

The basic game mechanic is really cool, but we found some problems:
— The diversity of the game consist only in the form and size of the fields, number of opponents, but while the process itself doesn’t change.
— Some levels, for example, the 4th are very difficult, and the following ones are much easier, which was unpleasant for the game experience.

What is our plan

— The primary task will be to search for new mechanics, that will change the game process, making it more diverse.
— The second task will be to create the complete image of the game and to bring its appearance and mechanic to a new level.

For the first task, we need to find solutions that will significantly improve the gameplay but will not change the basic mechanics of the game. Here are 3 main ways which we choose:

1. Introduction of objects affecting the gameplay.

We decided to add the points on the map, which the player can capture and receive bonuses or victory. Also, there will be other objects on the map that perform various processes of game space moving. For example, deploying it, interacting with it, freezing the area. The introduction of such objects will allow to change the gameplay, add the fortuity and some unique moments.

Because of previous changes, we can use another way to improve the gameplay — to add another Victory Conditions. You might think: “Oh how original!” But don’t rush to conclusions. For example, at the standard level, you need to capture the enemy’s crosses and make sure that he no longer has moves. Here you have a strategy and strictly stick to it. But suddenly everything changes — your task is to capture a certain point on the map faster than the opponent, not to beat the enemy. And here your strategy will not work. You need to think quickly, invent a new strategy in order to win the game. It will change the gameplay, for sure.

3. Add the ability of the player to influence the process of the game.

There will be a small set of 3 abilities of different strength levels which will help the player in the game.

Prototype of the game. We need to add mechanics and redo the appearance

This is all changes which came to our mind. We hope that these game elements will refresh the game and make it more interesting. After introduction all these processes into the game, we will create a new prototype. After testing we will choose good mechanics and get rid of the unsuccessful one. Then the time of animation creation will come, but that’s another story.

CEO and owner of Garden of Dreams Studio. He likes RPGs, Rogue-Like games and Business Simulators even more than the films of James Cameron. He likes board games. Runs marathons, participates in the triathlons. Feel free to ask John any questions you have.

Worth reading...
First Game in Development