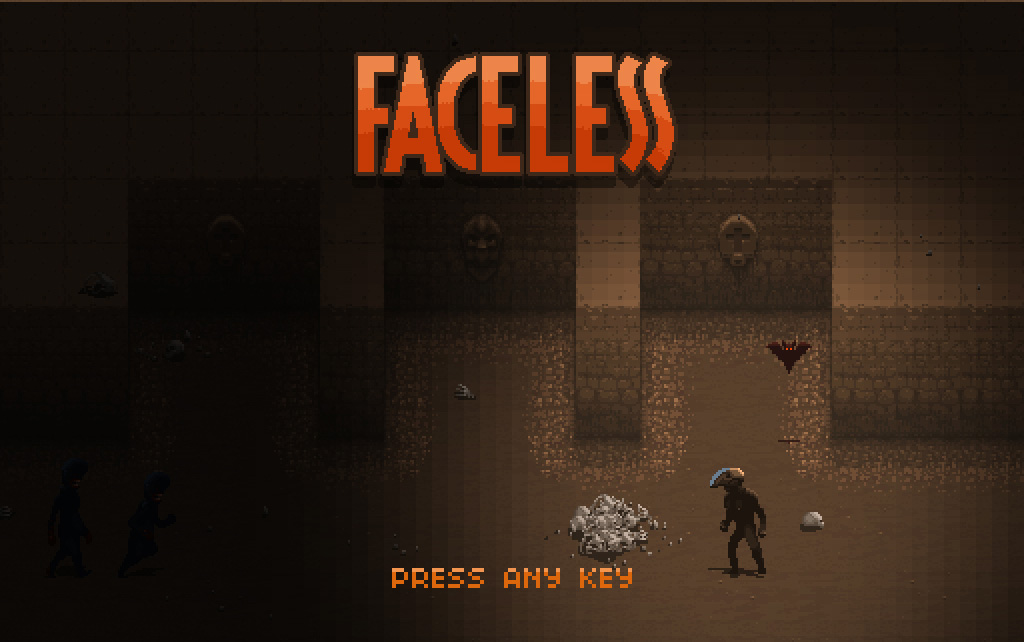 Today we want to tell you about our special project. We started work on this game in 2016, but then we did not manage to complete it. Only now, during the search for talented developers, we found programmer Pavel, who will be able to complete the project.

When Pavel came to us he said that he would like to start developing a roguelike game. And we immediately remembered our project, Faceless.

The game is pretty gloomy and creepy. It is about a miserable person who lost his face and soul. He is trying on different masks, which give him the ability to defeat the enemies. His main goal to find the monster who kidnapped his personality. Not so positive story, yeah?

Before hiring the programmer we already had few significant things, for example, the document with a full set of technical tasks and almost completed animation for the game.

But it wouldn’t be us if we didn’t want to improve the game.

We decided to add some changes to the game:
— change the enemies. We want them to be a complete character with own individual traits and abilities.
— improve the AI, which will allow monsters to not only hunt the player but also to do it in an organized way.
— improve the combat system by adding additional abilities for each mask. Now we will add a mask development system, which will give passive ability and an ultimatum skill.

Today we are on the stage of prototyping the game, implementation of characters and programming their behavior. It will help to make the game more variable and interesting. Now we are testing all possible features in order to leave the best.

The next stage will be the creation of the mechanics of the player’s skills, allowing him to influence the battlefield in various ways, selecting masks with suitable abilities.

In this project, we already have a large supply of sprites and animations, so we can show the results of the first, and most importantly, the second stage much earlier.

Now we have to go back to work, and continue to develop the first stage.

CEO and owner of Garden of Dreams Studio. He likes RPGs, Rogue-Like games and Business Simulators even more than the films of James Cameron. He likes board games. Runs marathons, participates in the triathlons. Feel free to ask John any questions you have.

Worth reading...
Game Development Progress: 5 Mobile Games on the Go!